With the arrival of a blooming flower, I assumed that last week’s amaryllis posting would be our last.  Then the second stem showed some determination to grow.  I trimmed the first stem (the flowers had begun to fade) and now we are keeping watch on the bonus bloom. 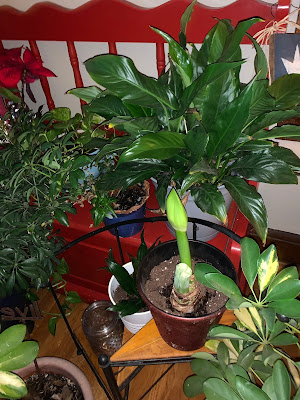 Things are looking hopeful.  That a bonus bloom is looking to hold forth even as the days are growing steadily longer and the temperatures are mild has contributed to my growing Spring fever.  In the next few weeks we may have a flower and Sassafras Spring (the day that I pack up my Winter clothes and declare the arrival of the blooming season). 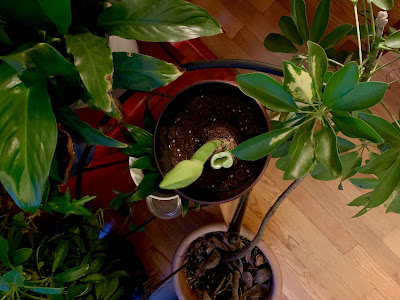 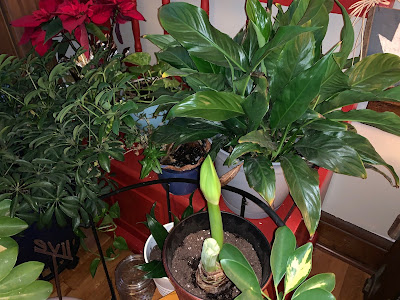 Email ThisBlogThis!Share to TwitterShare to FacebookShare to Pinterest
Labels: amaryllis, me, seasons

Yesterday afternoon, I curled up on the sofa with my current book.  I’m nearly done reading it so, as is my habit, I had two others nearby, nominees for the next book I will read.  At some point, T came downstairs and found me there, asleep with three books on my lap.  When I woke up, she teased me about it, amused that I took to the sofa with three books, as if some sort of book apocalypse might befall me there in the living room.

I defended myself by pointing out that I am nearly done with the book du jour and was auditioning candidates for my next read.  She laughed but I could tell she thinks I am a crazy book lady.  As I am in fact a crazy book lady, I took no offense.

I record books that I have read on Goodreads and, in keeping with my competitive spirit, participate in their yearly Reading Challenge, whereby you pick a number of books you expect to read in the year and the app records the books.  This morning,  I logged in to record the book I finished the night before.

At this point, Goodreads informed me that I am behind in the reading challenge for 2020.  Though this is an entirely artificial matter and there is neither reward nor bragging rights involved (I am private on Goodreads and so no one but me sees it), I am quietly freaking out.  Behind on reading?  Me?  What will become of me?  How will I face myself each day?  And most importantly.....How can I read more?

It is ironic that this terrifying news happened less than 24 hours after I fell asleep on the sofa with three books in my lap.    I feel like Goodreads needs to check in with T, who can attest to my bona fides as a good reader.

Email ThisBlogThis!Share to TwitterShare to FacebookShare to Pinterest
Labels: books, me, reading, T

Twenty years ago this day, I became a mama just after midnight when a certain young man with shiny dark eyes agreed to make his  appearance. 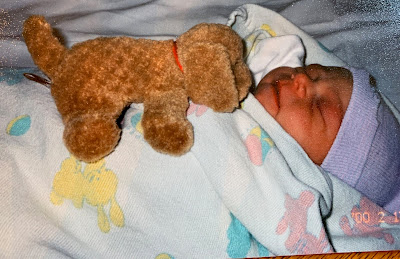 It’s rather hard to believe how quickly 20 years have passed.  As I think about my 20 year old college boy, I’m struck not by how much things have changed but rather by how much of JT at 20 could be seen when he was just a little boy.

When JT was 7 and discovered that high school kids didn’t get daily recess and PE class, he recoiled at such a notion.  In his mind, there were three reasons to attend school: PE, recess, and Field Day.  The rest of school was sometimes interesting but mostly time spent waiting for the good parts.  That same year, he asked why people walked places when they could run.  The signs were all there. 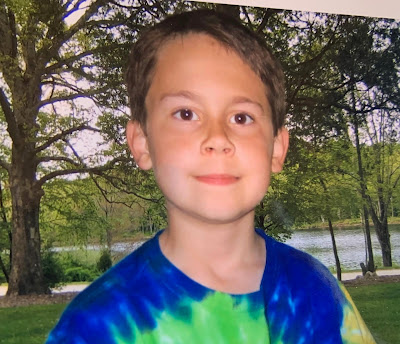 By the time he was in high school, he’d made his peace with the lack of recess and daily PE class.  Consolation came in the form of athletic teams and after school practice.  When it came time for him to select a college, I wasn’t surprised that he chose Springfield College.

If PE had a college, it would be Springfield.  He’s happy there, taking classes that interest and inspire him, running mile after mile with his teammates, and growing into an opinionated and kind-hearted young man.  Today, he’s in classes at college and I won’t get to give him a birthday hug.  But I sent him a package and a handmade card with my annual birthday note.  He knows that he is a well-loved and lucky young man. 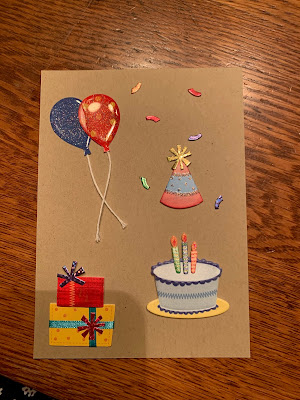 Twenty years blew past me in the blink of an eye but I will never forget his first day in this world; the day that I became a lucky mama. Happy Birthday, sweet boy.  Your mama loves you. 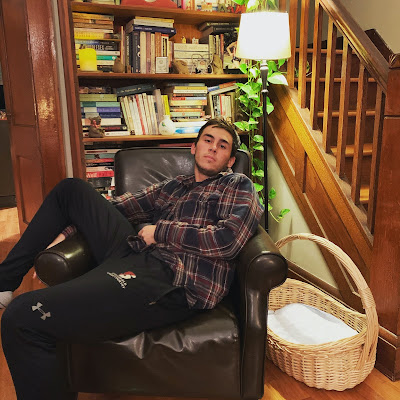 Email ThisBlogThis!Share to TwitterShare to FacebookShare to Pinterest
Labels: JT, me, parenting, reflections on motherhood

These little treats are Valentines for some deserving friends. 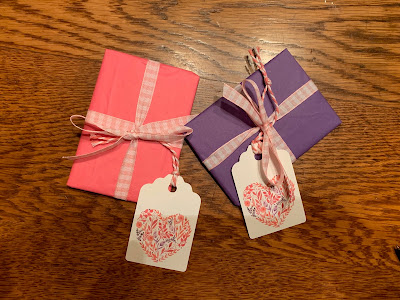 They turned out well and I am reminded again how very happy it makes me to have pretty gift tags, cheerful ribbons, and bright wrapping paper ready to make a pretty package. 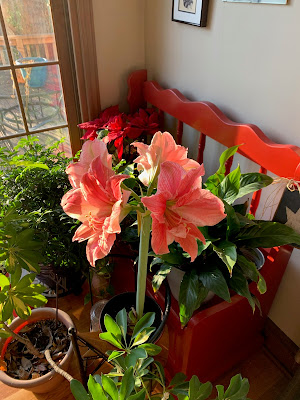 This morning, the amaryllis stem is standing to lean under its own weight, a development that usually occurs after the year’s flower has bloomed.  In this photo, is propped up with my hand.  It’s still lovely to see each day. 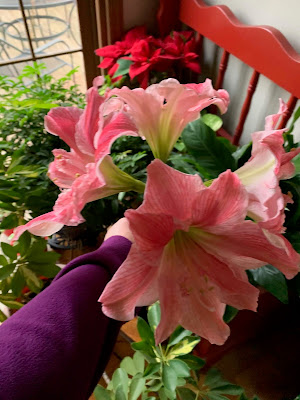 And, I’m starting to wonder if another stem is underway.  I’ll watch closely in the next few days because a bonus flower would be most lovely. 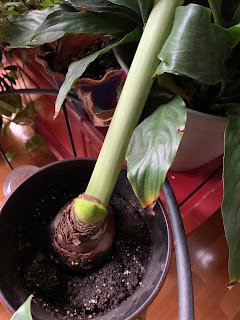 If not, my pretty pink flower, the mild weather of February, and the tips of daffodils peaking through Winter’s soil, has me convinced that Spring really is close at hand. 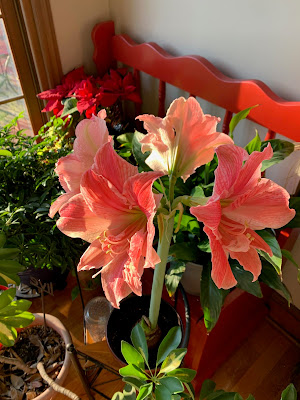 Before I make a New Hampshire prediction, it seems appropriate that I acknowledge the mess that was Iowa.

In terms of my own prediction, I was off-base.  I didn’t see Buttigieg trending upward as significantly as he did; neither did I see Biden tanking.  The confusion on the evening of the caucus was nothing compared to the nonsense which followed.  It’s especially frustrating to have such a chaotic start to a campaign in which we - the Democrats - absolutely must demonstrate measured competence.  Given the generally good economic numbers, the only way to beat Trump will be to hammer home his failures as a role model.  The examples here are legion - prayer breakfast, Twitter, any rally speech he gives - but we cannot take it for granted that the nation will reject Trump because he’s a debacle of a human being.

In light of the mess that followed the Iowa voting, it seems more hopeful than ever that the Iowa Caucus has died.  It should do so, largely because Iowa may be a nice place but it is in no way representative of the nation and the caucus process, where voters are expected to hang out for 90 minutes on a cold Winter evening, is not very democratic.  Parents without childcare may not attend; Iowans with jobs to work that night are not included.  Running in Iowa costs campaigns loads of cash when it works; when it doesn’t, it’s a huge waste of time and resources.  It’s time to be done with it.

New Hampshire shows promise as a more organized affair though, like Iowa, it’s a costly and unrepresentative contest.  It appears that Buttigieg got more of a boost out of Iowa than Sanders, largely because exceeding expectations will do that for a candidate.

I think that New Hampshire will be a Sanders win.  Buttigieg and Warren will follow at second and third respectively.  I think Klobuchar will come in fourth and Biden will come in fifth, literally limping his way into Nevada (another caucus - yikes!) and then South Carolina.

Little Blue has gone.  In her stead there is a new wagon in the driveway. 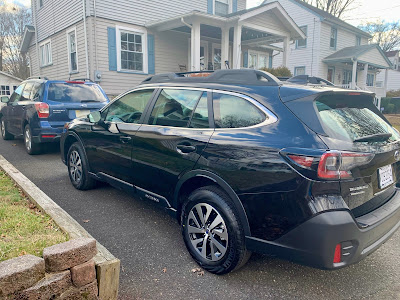 Her name is Black Beauty and I feel like a badass behind the wheel.  This is perhaps unwarranted, as I am 52 and known for my affection for polka dots and sensible shoes.  And I am driving a station wagon....but here we are.  We’re looking forward to many adventures together, this wagon and me. That’s happy!

Email ThisBlogThis!Share to TwitterShare to FacebookShare to Pinterest
Labels: Black Beauty, car, me

Ode to the Little Blue Wagon

When my blue station wagon first came to live in the driveway at Sassafras House , it was 2011 and I was the mother of an 11 year old boy.  Within a few weeks of buying Little Blue, I met T.  My sister, aware that the last time I had owned a station wagon was 1999, when I got pregnant with JT, announced “you will be driving wagons forever now.”

Truth is a funny thing.

I do love a station wagon and over the years, my blue wagon has provided faithful service.  It’s brought home many a grocery bag, been camping, and carried sports equipment and chairs for fans to sports events all over the state.  Tucked in the side bin on the driver’s seats were loads of maps from those journeys.  These days, I use my phone and Google, but the wrinkled maps remain.

I insisted on a standard transmission when I got Little Blue and it must be said that I love driving a stick shift.  These gears (and the clutch!) have carried me more than 100,000 miles.  That’s no small achievement in New Jersey, the stop-and-go traffic capital of the mid-Atlantic.

On the first weekend of February, Little Blue’s engine seemed unhappy.  A trip to the mechanic confirmed that there was trouble.  Big trouble.  $2700 would put it back on the road, but I still needed new tires and the clutch has 100,000 miles on it…. Loathe to put  that much money toward repairs into the 9 year old wagon, we parted today. 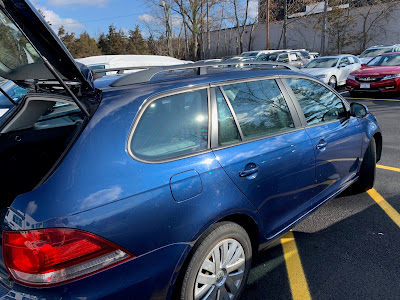 Little Blue has been sent to the great auto beyond but the memories of the first kiss I shared with T,  daily drives to school with JT, downshifting around a curve, and driving all over the northeast in her company will happily remain.   Thank you, little blue wagon.

Email ThisBlogThis!Share to TwitterShare to FacebookShare to Pinterest
Labels: car, daily life, me

There is a flower about to bloom and each day for the past week, the prospects have been looking quite splendid.  Seen here before the morning light arrives, the flower is nearly open. 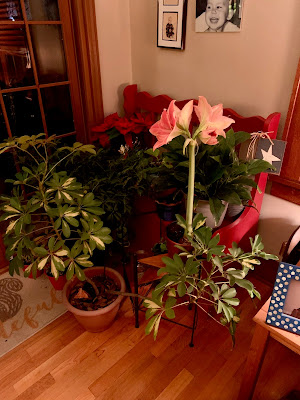 When this flower opens, it will feel like an introduction to Spring.  Over the past weekend, the mild weather (for Winter…..it was in the 40s) had me making bold pronouncements about when the garden would be planted. Mid-April, I announced.  We’ll see how things look come that point.  But right now the February sunlight and clearly lengthening days are making me feel giddy. 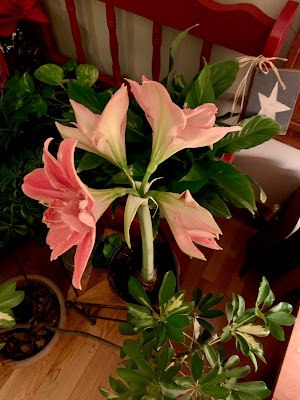 It feels like a very nice start to the coming Spring.

Email ThisBlogThis!Share to TwitterShare to FacebookShare to Pinterest
Labels: amaryllis, me, seasons, spring

Much to T’s dismay, the garden around Sassafras House is covered in ivy.  At various points, I do try to limit the ivy but that’s only under duress (it’s climbing over a window or choking a hosta plant).  Not so secretly, I love ivy.  This Winter, I left a pot of ivy out on the porch.  The hearty ivy is holding its own and is the center of the February front porch table. 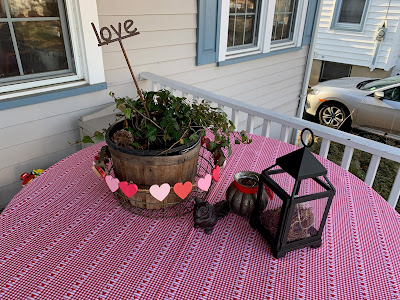 Hearts are the theme, of course.  The tablecloth is new, a Christmas gift from my mom.

The polka dot ribbon on the front door wreath makes me happy; polka dots always do. 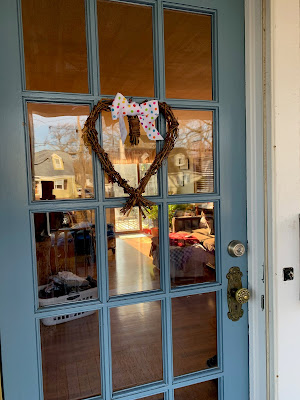 The flag is cheerful, which befits the sunny day that started our month. 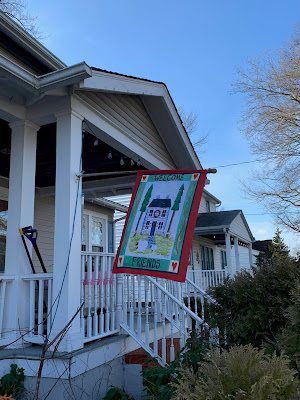 With 29 days to its name, I am happy that the last full month of Winter has made its arrival.  This month is JT’s birthday and memories of the day he was born are always nice to recall.  March (and Spring!) feels as if they are just around the corner, because they are.  That’s happy! 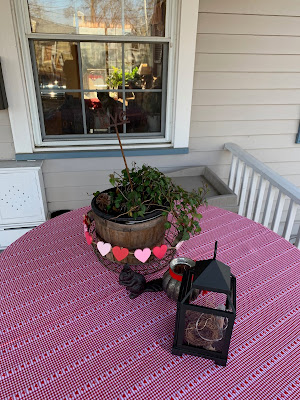 A System of Checks and Balances

It’s no secret that I never liked - or respected - Donald Trump.   Aware that he won the Electoral College but lost the popular vo...