I really need to get to weeding but otherwise there is promise everywhere I look in this garden.  There are at least a half dozen jalapeno peppers set on vines. 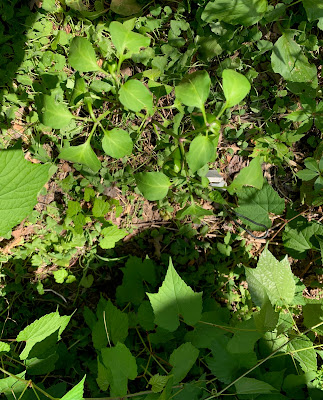 There’s a patch of heat coming our way and after I mow the grass today,  I will set out the sprinkler.  Within a few weeks, I’ll be harvesting tomatoes from the many green ones currently at work ripening. 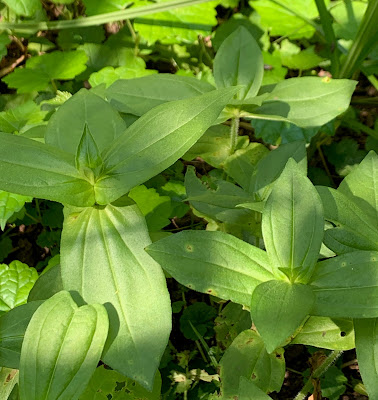 Email ThisBlogThis!Share to TwitterShare to FacebookShare to Pinterest
Labels: garden 2020

I love my country with a depth that has fostered a career spent teaching about its history and politics.  I am a patriot who named her only child after the man whose words we celebrate on this 4th of July day.

But I am no “Love my country right or wrong” patriot.  I am an “I love my country enough to right the wrongs” patriot.  This year, a year determined to teach us some very important lessons, it seems appropriate to pause and think again abut the patriot I am.

I’ve taught it so much that I know the preamble to the Declaration of Independence by heart.  I read it several times a year; I think about it often.  I teach the Declaration in terms of that preamble and I never fail to be stirred by the claim that all men are created equal and endowed with the right to life, liberty, and the pursuit of happiness.  I think of the power of such a claim when it was made in 1776 and as we try to live by it now.  I teach my students that every right Americans subsequently demanded to have recognized, be it the right to be free from slavery, to vote, to marry whomever we please, was recognized in those words and was there all along.

If the theme in my flowerbeds is lush and over grown (and it is), there there is no reason such a theme cannot be carried over to the front porch.  And so it does. 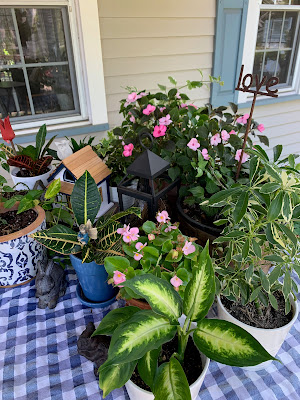 T gave me a flip flop flag and wreath and July is the perfect month for a woman loathe to wear shoes. 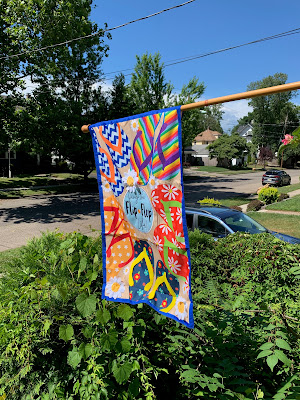 The ease of Summer is something I long for in the cold weather and never take for granted when the warm days settle around us.  I start my day on this front porch every day of the Summer and I never tire of the plant-fortified view that greets me in the morning. 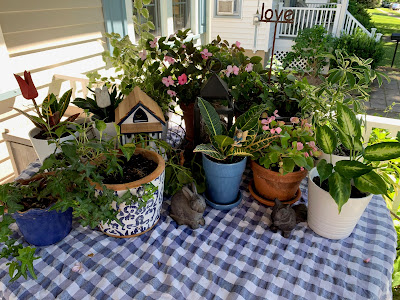 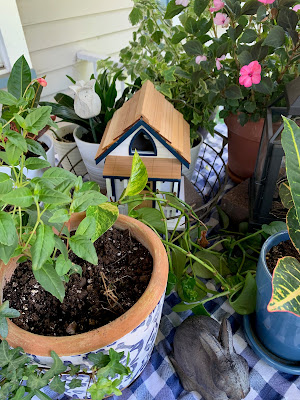 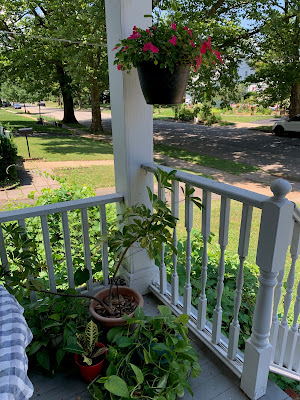 Given the time, I’m out here in the afternoon with my iced tea and my books.  It’s my favorite room of the house this time of year and I spend so much time here that I can spy a new leaf on my plants the moment it first begins to bud.  Pandemic worries aside, the Summer is determined to fly right past.  I am making the most of it while it’s here. 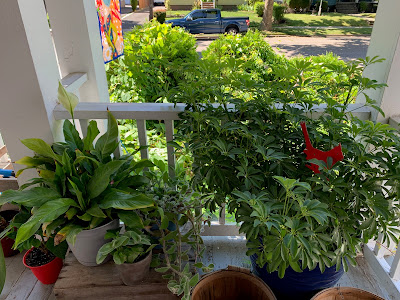 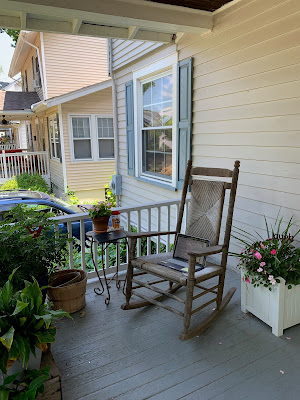 It’s the lush and overgrown season around the garden and that is just fine by me. 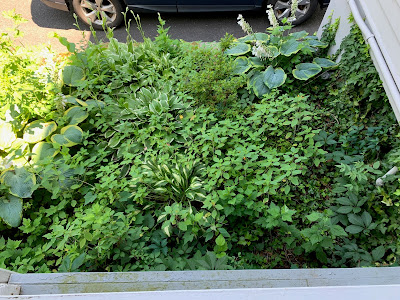 I enjoy the morning dew cradled in the elephant ear hosta leaves.  I like the jewelweed showing off in between the hostas and the variegated leaves are especially pretty to me. 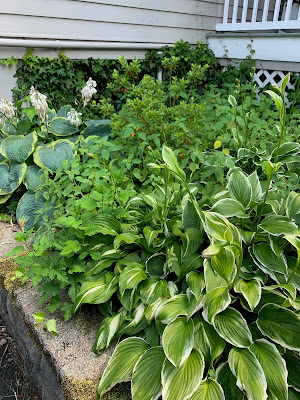 And how about those hosta blooms? 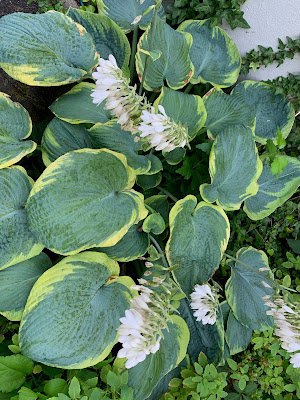 I spy this flowerbed from my perch on the front porch each morning and it never fails to make me happy.  In this strange Summer of pandemic anxiety, it is a reminder of the beauty to be found all around me.

June Book Report: The Warmth of Other Suns 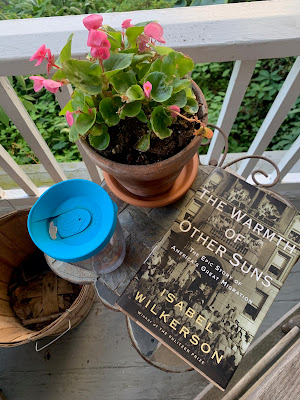 This month, I re-read Isabel Wilkerson’s splendid The Warmth of Other Suns: The Epic Story of America’s Great Migration.  I first read the book when it was published in 2010 and the stories and history Wilkerson wove quickly inserted themselves into both my understanding of our national history and my teaching of it.  I never forgot the descriptions of the journeys that Wilkerson describes and when I began to plan the Civics and Citizenship class I will teach 8th graders in the coming school year, I knew that Wilkerson’s book would be a part of it.

At over 500 pages, it’s rather more than the 8th grade is ready for all at once.  But earlier this month I commenced a re-read to choose sections from the book to serve as the foundation for the summer reading I will assign the class.  In any setting, the book is worth reading.  In this moment of historical time, as the growing Black Lives Matter has absorbed our national interest to a greater degree than it ever has before, it was a particularly powerful re-read.

Wilkerson writes like a journalist but thinks like an historian and the combination ensures that the reader flies through the pages.  When I did put the book down, my mind was consumed with the arc of the story she was telling.

My Civics and Citizenship class will start with the second founding of the United States, the one accompanied by the Reconstruction amendments.  Though the Great Migration doesn’t “officially” start until the second decade of the 1900s, the seeds of it were planted by those amendments and our subsequent national failure at the task of rebuilding a national union with liberty and justice for all.  My class will take itself to the 1970s and the close of the Great Migration.  At every stop along the way, Wilkerson’s book will accompany the story we will learn.

Parts of the book will be required reading for my 8th graders.  I do this in the explicit hope that as they grow into their citizenship, they will read the rest of the book on their own.

The last hour of sunlight in late June and July is splendid on clear days and for a few minutes before the dusk truly settles around us, the whole of Sassafras House is aglow with light so magical that even calling it the Golden Hour doesn’t sum up how lovely it is. 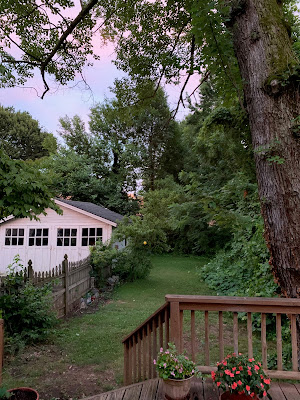 Saturday evening the light was especially nice and I popped outside to make some pictures. 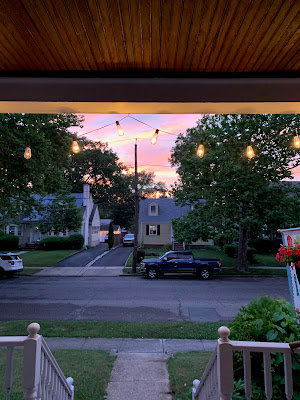 I find such joy in moments like this; a pleasure that infuses my heart for longer than the moment itself lasts. 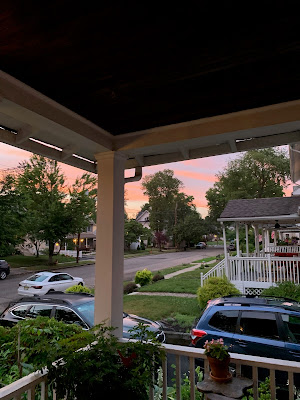 Summer, with its verdant plants and blooms, with its ease and warm blue skies, seems an especially nice time to pause and enjoy the Golden Hour. 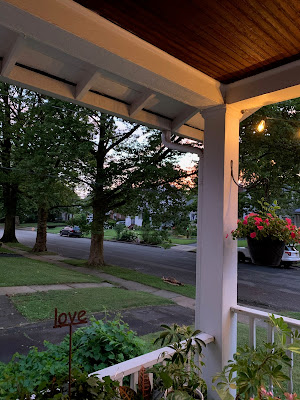 Yesterday, I got my first pedicure since life shut down in mid-March.  It’s an admittedly small thing but I have missed my trips to the salon for the quiet luxury of a pedicure.  My regular salon is a hard-working family business that always makes me feel welcome; yesterday was no exception.  The salon was re-organized to allow separation; at limited capacity and with plastic shields between customers and employees.  We all wore masks.  We also took care to ask how people and their families had fared while the business was closed.  I treated myself to some flowers on my big toe, a celebration of the summer and gratitude for this small bit of unmitigated pleasure in a hard time. 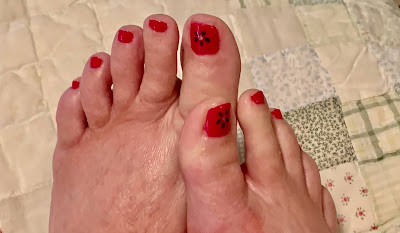 Email ThisBlogThis!Share to TwitterShare to FacebookShare to Pinterest
Labels: blessings, COVID 19, me, treats

High on that list are the joys of a pedicure.

Nail salons have been shut down since stay-at-home orders went into effect in mid-March.  My last pedicure was March 8.

Yes, I am counting.

As New Jersey begins staged re-opening, nail salons are expected to re-open later this month.  My raggedy feet and I cannot wait.  I have missed the treat that is the smooth feel of pumiced feet and shiny, polished toenails.  I know it’s a small thing.  I know that staying home was more important than my toe nails.  But, damn, I am beyond ready for a pedicure.

Email ThisBlogThis!Share to TwitterShare to FacebookShare to Pinterest
Labels: anticipation, COVID 19, me

Heady with the success of our first Saturday adventure in New Jersey, T and I set off to visit Monmouth Battlefield last Saturday.  The day was hot and humid and there were a few bolts of lightening and raindrops as we made the drive south.  The trees were a lovely reward when we arrived. 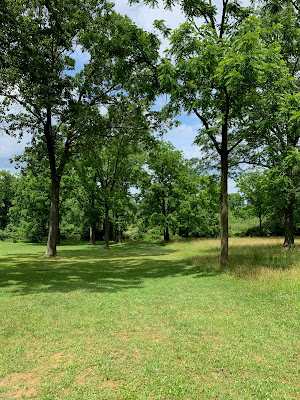 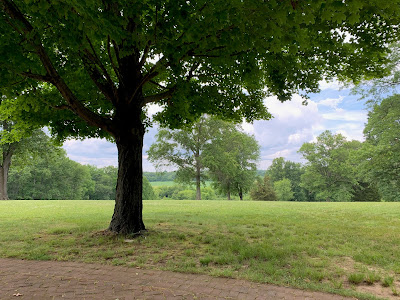 We walked down the hill and across a bridge over the salt marsh. 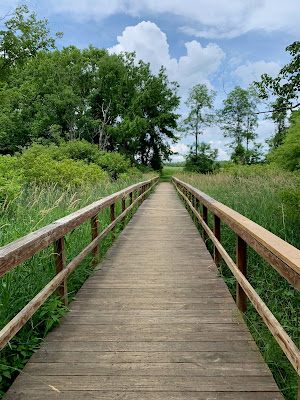 These days, the fields where the battle was fought are farmed and there were neat rows of corn as far as the eye could see. 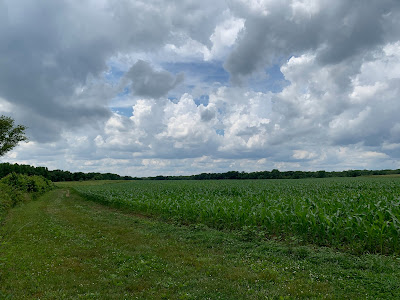 New Jersey often offers this kind of contrast, with salt marshes and woods, farmlands and green fields often located right next to another. 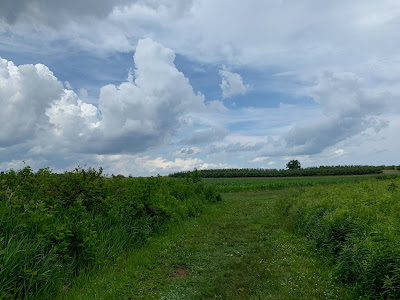 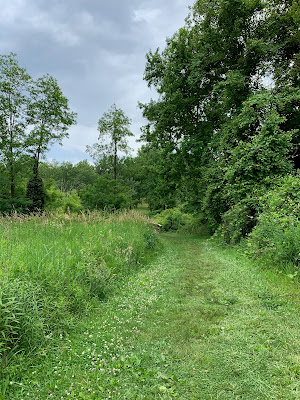 The beauty of the state at its finest is never lost on me.  I have been glad to call this place home for the last 18 years.  These days, as the people of our state have hunkered down to flatten the curve, I’ve been proud of the spirit of my fellow New Jerseyans, masks on and six feet apart as we share kind smiles and look after one another.  In public spaces, I feel a renewed recognition that we are truly in this together. The landscape we enjoy seems more valued than ever as we remember that more than 13,000 of us no longer can take joy in these views.
Posted by Stacy at 2:00 PM No comments:

My backyard never fails to bring me happiness.  It’s green and overgrown and just the way I like it. 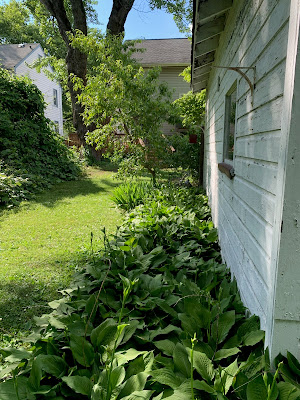 Some days, it’s nice to pause and admire the beauty that surrounds me, all here for the taking even when the world seems to be spinning out of my control. 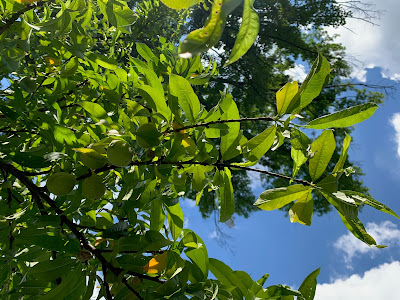 These peaches are growing bigger by the day.  Though I fear that most will serve as squirrel snacks, I am hopeful that at least a few can be served at my supper table.  Each day moves us a little closer to that prospect.
Posted by Stacy at 2:00 PM No comments:

Stacy
I am done with bullshit and lies in the White House and heartened by last month’s Supreme Court rulings on gender equality and DACA. I believe that Black Lives Matter. I will vote blue in November and will work hard on behalf of Democrats who care about justice and equality. I like to read (I just finished Isabella Wilkerson’s powerful The Warmth of Other Suns), garden, cook, and talk. I love…mornings on the front porch, fresh pedicures, cool sheets, Miss Read stories, Pippa the front porch bird, the cool feel of an air conditioned room, thinking about teaching History, my houseplant collection, variegated leaves, tomatoes ripening on the vine, fresh-baked homemade buttermilk biscuits, pretty planters, the color blue, summer rainstorms, the golden hour, justice, Frederick Douglass quotes, pretty notepads, long drives in Black Beauty, and my daily garden stroll.