I picked up News of The World, by Paulette Jiles, on a Friday afternoon at the library.  The cover was intriguing and a quick read of the inside leaf suggested that it was my kind of story.  Set in post-Civil War Texas, the story opens in 1870.  Captain Jefferson Kyle Kidd, a veteran of Jackson’s Indian campaigns and the Mexican-American wars, is a circuit rider who visits northern Texas towns and reads newspapers to the townspeople who pay a dime to hear the news. 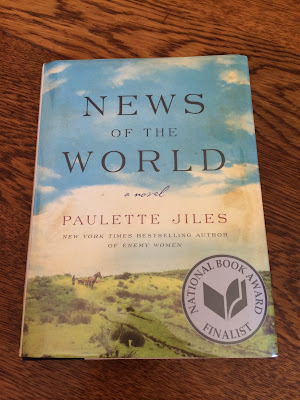 Too old to fight in the Civil War, Captain Kidd is still a victim of that war, which cost him his printing press and his land. Now a widower whose adult daughters live in Georgia, he travels land that borders Indian territory and enjoys the travels.  He avoids local political news, sure to cause conflict in lawless post-Civil War Texas, in favor of news from places from far away.  The nomadic life suits him but also lands him in an awkward situation, the recipient of a ten year girl who had been captured by Kiowa Indians at the age of six.  Raised by the tribe since then, she looks German-American but only speaks Kiowa and has embraced their sensibilities.  The tribe has reluctantly turned her over to an Indian agent thanks to U.S. policy which sent military troops after tribes with white captives.  Johanna, like most child-captives, is the unfortunate victim of the policy.  Having been embraced by the Kiowa tribe, she is fully a part of them, and the handover to Captain Kidd finds her culturally isolated and mourning the only family she can remember.

Kidd’s task is to return Johanna to her Aunt and Uncle, who farm south of San Antonio.  It’s a dangerous three-week journey and he undertakes it with profound reluctance, less concerned about their safety than he is annoyed by the responsibilities of the girl and his regular recollection that he has already raised two daughters.  The story which follows is a lyrical and lovely reflection on the nature of life and family, with vivid descriptions of the Texas landscape and richly imagined characters.  As Kidd and Johanna come to know one another, their definition of family expands.  The fullness of life they find from one another is lovely but not sentimental.  Page after page in this book is filled with sweetly powerful reflections on the human condition.

Regarding his plan to read the news from far away, the narrator tells us Captain Kidd’s thinking, “If people had true knowledge of the world perhaps they would not take up arms and so perhaps he could be an aggregator of information from distant places and then the world would be a more peaceful place.  He had been perfectly serious.  That illusion had lasted from age forty-nine to age sixty-five.”

Kidd is a Union man in divided Texas, but he’s not without sense of the cost of the war, as the narrator explains, “No matter what side you were on, if you had survived Gettysburg, you were to be congratulated.”

When their journey south is threatened, Captain Kidd finds that he’s not alone as he mounts a defense.  The narrator explains it to the reader,  “The girl sat in the wagon bed behind wrapped in the thick red and black jorongo.  There was no method by which he could explain anything to her but she did not need explanations.  Her family and her tribe had fought with the Utes, their ancient enemies, and the Caldos.  They had conducted long guerrilla warfare with Texas settlers and Texas Rangers and then with the U.S. Army.  Often enough they had faced the howling, striving demons of the open plains: hunger, tornadoes, scarlet fever. She didn’t need to be told anything except that there were enemies in pursuit and she had already figured that out.”

After an attack is repelled, the Captain finds himself needing to explain the culture Johanna must now join.  She wishes to exult over the vanquished but the Captain responds, “No. Absolutely not.  No. No scalping. He lifted her up and swung her over the ledges of stone and then followed.  He said, It is considered very impolite.”

As the journey to San Antonio unfolds, the Captain has time to reflect on life and the passage of time.  The narrator explains his thoughts, “Maybe we have just one message, and it is delivered to us when we are born and we are never sure what it says; it may have nothing to do with us personally but it must be carried by hand through a life, all the way, and at the end handed over, sealed.”

In a reflection on his growing fondness for Johanna, Captain Kidd finds a wisdom that applies to circumstances well beyond his situation at the moment when he considers that,  “He would have liked to kiss her on the cheek but he had no idea if the Kiowa kissed one another or if so, did grandfathers kiss granddaughters.  You never knew.  Cultures were mine fields.”

This book was a powerful journey through an historical time and place different from my own, though both are twisted with uncertainties.  I read the novel in a weekend because it was nearly impossible to set aside.  The timeless reflections on the human condition were a comfort to read.  I expect that I will come back to this story again and again.

Email ThisBlogThis!Share to TwitterShare to FacebookShare to Pinterest
Labels: book report, history, me