The Power of Powerlessness

As I plan my Harriet Tubman lessons for the 7th grade, my mind continues to whirl with the story of Tubman’s life.  Born to the Ross family, as a child she was known as Araminta.  She chose a new name when she escaped to freedom in 1849, calling herself Harriet after her mother.  It was a reinvention that led to freedom for more than 300 other people, all at the hands of a woman once enslaved. It’s a story with lessons that resonate today.

When Araminta Ross was six,  her father Ben had to stay behind while his wife and children when were sent to work 15 miles away, at a farm belonging to Edmond Brodess in Dorchester County, on the eastern side of the Choptank River.  There, Araminta looked after children, worked in the fields,  hunted muskrats, and found that she was a good observer of the outdoor world.  Her father had taught her to identify the North star so that she could navigate home after dark and as she grew up, she cultivated more knowledge of the outdoor world.  As a teenager, contracted out to work for slavemasters in Cambridge, a harbor town, she mingled with free black men who worked the Chesapeake waters and taught her about the river and the tributaries and creeks along the Eastern shore.  They also told her about life in the North, where freedom beckoned.  The presence of Quakers in the region ensured that those who sought freedom from slavery might find help.

Free and enslaved African-Americans in the world of Chesapeake, Maryland, moved amongst one another.  They intermarried, with freemen sometimes having children by their enslaved wives. Araminta Ross became Araminta Tubman when she married John Tubman, a freeman.  Children born to enslaved mothers were themselves enslaved and families of this kind faced the constant risk of separation.  White slave owners in the region treated their slaves as an investment and when debts needed settling, they didn’t hesitate to sell their enslaved property to slave traders at the wharves in Cambridge, who would arrange for the human property to be shipped off as cargo to plantation owners in the deep South.  If this occurred, families would likely be separated for good, unable to communicate with one another because they could neither read nor write.  This fate befell two of Araminta Ross’s sisters and it was the threat of being sold away from her family that finally inspired Araminta to try her hand at freedom in 1849.  As she explained to the author of an 1886 biography about her life, "I had reasoned this out in my mind; there was one of two things I had a right to, liberty, or death; if I could not have one, I would have the other; for no man should take me alive; I should fight for my liberty as long as my strength lasted, and when the time came for me to go, the Lord would let them take me.”

When the details stack out, I can see how it was that Harriet Tubman could escape to freedom: she knew the landscape well, the river led north, as did most the creeks, marshes were good places to hide tracks, Quaker settlements in the area were known to oppose slavery, it was less than 75 miles to Philadelphia and freedom.  But she still travelled with the risk of death or a punishment for escaping that might be worse than death, there were still great unknowns,  and she had to repeatedly rely on the kindness of strangers.  To make the journey once was courageous in a way modern life never demands of us.  And to go back repeatedly over a 10 year period to rescue both family and strangers….well that is simply splendid heroism, from a woman born to a world that underestimated her mightily.

It’s common to claim that the underestimation of her strength is what empowered Harriet Tubman.  But that claim undermines both her bravery and her brilliance.  Vaclav Havel wrote that the power of powerlessness can be found in the refusal to yield to fear.  Araminta found that power and it made her rebirth as Harriet Tubman something to behold.  There is a lesson there for all of us and I look forward to sharing it with the 7th grade. 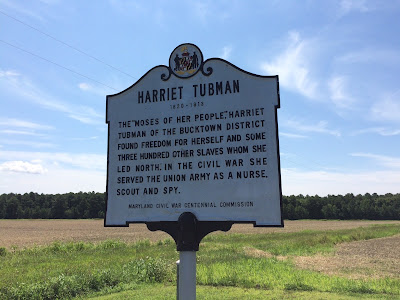