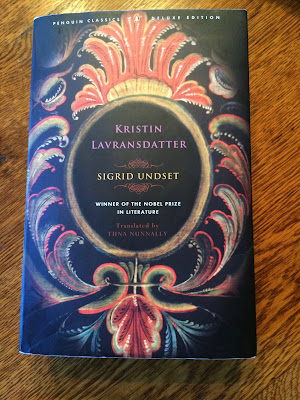 I prefer happy stories.  Happy in this case is loosely defined to mean a book that is not filled with terror, unremitting anxiety, or endless misery.  It’s not relentlessly happy, of course, because life isn’t relentlessly happy.  But it does lean toward happy, a characteristic that I really prefer in a book.  I picked up a trio of books by Sigrid Undset.  Together, the three novels are called Kristin Lavransdatter; all three novels center on the life of Kristin, first as a girl, then a young married woman becoming a mother, and in the third novel as mature married woman and mother.

Set in 15th century medieval Norway, the book is a collection of three novels about the life of Kristin, the beloved daughter of a prosperous Norwegian squire.  She grows up in the mountains near modern-day Lillehammer, and ultimately marries a man from further north in Trondheim.  I’ve read the first two novels in the series and this month’s review is about the second book, The Wife.

Undset wrote the novel in  the 1920s; it was a major factor in her receipt of the 1928 Nobel prize for Literature.  The book is a genuine masterpiece, with an epic sense of historical time in the life of one women, Kristin.  Kristin is neither singular nor distinct; though she does defy the social norm of the day to marry a man her father is not convinced will be a good husband.   Kristin is a rich and complex woman who is both a creature of her historical time and also admirable in modern terms.  Undset’s knowledge of precise details of Norwegian medieval life and history is vast and impressive and enriches the tale.  Much of the story in The Wife involves Kristin becoming a mother (of seven sons!) and coming to terms with a marriage she desperately desired but finds to be more difficult than she imagined.  The book is rich with Norwegian history and the role of the Christian religion in the lives of medieval Norwegians.  As Kristin sorts out the complexities of getting her heart’s desire, the reader sorts out the complexities of the history of women’s lives.

I’ve been reading a number of books about women’s lives in historical terms and this book fit nicely into that canon.  I’ve been struck over and over by the boundaries of a woman’s world, both in terms of history and in the modern context.  From the influence of marriage and motherhood on the lives of historical women to modern conversations about girls’ bodies and the clothing they wear, to my observations about the ways in which the women seeking the 2020 presidency must position themselves and are treated by the mainstream media, I am struck by the power of the boundaries of women’s lives.  The first two Kristin Lavransdatter books found me thinking about those boundaries, then and now, and I look forward to reading the third novel in this splendid collection.