I’ve been a fan of D.E. Stevenson books for the last few years.  Stevenson was Scottish and wrote in the mid-20th century.  She was prolific, writing over 40 novels over the course of her lifetime.  Some were written as series; others as singletons.  All are a treat.  I absolutely love Stevenson’s Miss Buncle series.  This month’s book was another of her works,  The Young Clementina. 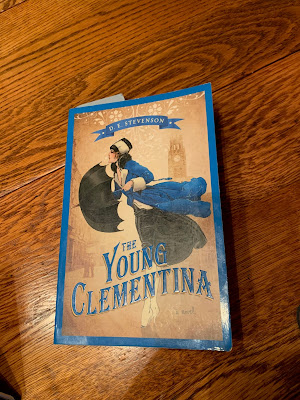 Like all the Stevenson books I have read, it has a well-developed story at the core.  The novel is filled with well-drawn characters and a narrator who is sympathetic to them all (well, right up to the moment when they no longer deserve sympathy).  There is amusement and wisdom in the story, which turns on the life of Charlotte Dean, who, after a series of complications,  is asked to look after her young niece Clementina.  Charlotte takes on the task out of a sense of duty and obligation and, despite the challenges, makes good on the job despite some difficulties that befall she and Clementina along the way.  In the end, Charlotte get a happy ending.  As she is a woman who very much deserves the happiness that Stevenson’s story serves her, that felt right.  I always love a happy ending and I enjoyed this story very much.

I will continue to keep my eyes peeled for Stevenson books.  They are always entertaining, filled with amusing characters and the sorts of comeuppances and happy endings I most enjoy in a book.